I had a call from Dispatcher Esperaza this morning at 6am. It was for a 911 Porsche clearance was 4 inches off the ground. It was having some mechanical issues. It turned off and wouldnt start back up again. When I arrived it was sitting on the driveway in the Hollywood Hills at the top of the mountain. The entrance to the gate was really tight. It wouldn’t be possible to get my truck in. I had to put the Porsche in neutral to back it up. Then very carefully bring it up on my Flatbed. I took pictures before and after to make sure I didn’t scratch the car. If I did I would have to pay out of pocket to fix it. As soon as I hooked it on, I took it to the dealership in Beverly Hills where I had to drop it so carefully. 4 inches off the ground isn’t enough space . I was so worried I was going to scratch it. It all worked out. No scratches and I was off to my next tow 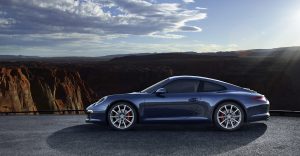